posted by Dick Larkin on April 21,2010 in Attitude

When you get your feelings hurt, and a prospect has been rude to you, and your spouse triggers your negative feelings, here’s a quick tip that is GUARANTEED TO WORK.

Recognize that the most expensive real estate in the world is the six inches between your ears, and that JERK isn’t paying enough to rent that space in your head for more than 30 seconds.

So how do you evict the squatter from your head? 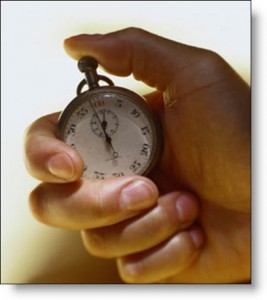 Start the timer, and throw yourself a colossal Pity Party. As quickly as you can say every bad thing knowing that you only have 30 seconds to get it all in, so talk in a rapid fire staccato.

I can’t belive that jerk cut me off.

Who does he think he is?

I was just trying to help, and he wouldn’t listen to anything I said.

He was so rude, I can’t believe it.

I’ll bet he’s a jerk like that to his wife and kids.

His wife is probably fat and ugly, with only two teeth.

His kids are probably slack-jawed hillbillies who get wedgies from the gym coach because they’re losers.

His dog probably pees on his pants leg when he falls asleep in front of the TV.

I hope he sits down and finds an empty toilet roll spool after it’s too late.

That guy could light up a room just by leaving.

The only reason he rained on my parade is because he doesn’t have one of his own.

It could be worse, I could have to go through life looking through his eyes.

I’ll bet he has a tramp stamp tattoo.

When the 30 seconds are up, straighten yourself up, recognize that he’s going to have to pony up a lot more money if he wants to rent any more space in your head.

And then go serve someone who deserves to have you helping them.

This site uses Akismet to reduce spam. Learn how your comment data is processed.